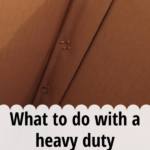 This step by step guide about how to make your own cardboard train and rocketship from one cardboard box was written by regular contributer Charlie Miller who lives in Vancouver, Canada.

Like everyone with kids these days, I am always looking to find new ways to entertain my toddler, and ideally ones that don’t cost very much!

My son loves playing with train toys and I’d seen cardboard box trains before but never tried it myself.

So when I had a new toilet installed, the shape of the cardboard box it came in got me thinking.

I decided it would be a fun idea to make a two-in-one cardboard playhouse that could be a train and a rocket ship!

Here is how I did it.

Materials Needed for 2 in 1 Cardboard Playhouse:

An irregular shape like this toilet box works best, but don’t worry if you don’t have that you can always join two boxes together to make the shape you want.

If you are like me you will have loads of boxes to choose from, especially with all the online shopping everyone has been doing lately – I always have a stash of leftover packing boxes!

I decided this really from looking at the box from different angles.

When I laid it with the long side of the box down the short bit that stuck up the back reminded me of the cab of a train where the train engineer sits, and the larger bit of the box looked like it could be the front of the train.

And when I turned it over so the short bit was on the ground and the long bit was vertical it kind of had a look of a rocket ship from the front – and the short bit behind would keep it stable I thought.

Now obviously for this to be a proper cardboard playhouse there needs to be a way for my son to get into it so I thought about how he could get in to both the train and the rocket.

I decided to leave the top of the cab open on the train and cut a rectangle from the back of the cab as well. So to get into the train he would go through the rectangle at the back and he can stand up like the driver.

In order to get into the rocket ship he crawls into the opening at the top of the cab and wriggles to standing inside the rocket and looks out the window.

I like arts and crafts projects but if I’m going to spend a lot of time on any one project I like to make it multifunctional – so making a train and rocket ship in one seemed like a great way of maximising the play he could get from my efforts!

The great thing about cardboard boxes is that they are a blank canvas.

I started by cutting the rectangle from what would be the back of the train cab.

I used a craft knife to do my cutting which worked well. You could try using some really sharp scissors but I think it would be harder to keep your lines straight(ish).

I also removed extra flaps and staples that were part of the box that I didn’t need. Remember this was a box that held a toilet, so it was pretty heavy duty and that’s why it had the staples!

I couldn’t get all the staples off, so before I started properly assembling the cardboard playhouse shapes I wanted, I first used the excess cardboard from the flaps to cover the staples (on the side where points could theoretically come through) so that there would be no danger of cuts or scrapes on my toddler.

I just glued extra cardboard pieces on top to cover those areas and to even out edges where there were ‘drapes’ that I couldn’t cut off. ‘Drapes’ I learned are the extra bit of cardboard that folds over a corner or another edge of the box. In a thick heavy box like mine they get in the way a bit!

Once the safety prep was done I started putting together the shapes that would turn my cardboard box into two cardboard playhouses.

Train Cab and Main Body of the Rocket Ship

I found an inner piece of cardboard material that I had cut off with a circle hole in it that I thought would add some height to the to the train cab part of my box so I glued that on the top of the short bit of my box – the part that would be the front of the train cab.

Note: If you were working with two cardboard boxes instead of a strange shaped toilet box you would want to cut an opening on one edge of the biggest box that is the same size as the opening of your small box and use hot glue, duct tape or a combination of the two to join them together.

I used a small rectangle of cardboard (you can just see it between the mugs in the photo below!) to form the funnel (I actually thought it was called a smock stack but my son corrected me!)

If I was doing it again I would have cut out a small hole in the top of the biggest box near the front and inserted a toilet paper roll or cardboard tube to form the funnel – that would probably look better!

I then glued on the rocket ship point & fins.

I used gorilla glue. It takes a little bit longer to dry but it is more secure, which will help it stand up to toddler play.

For gorilla glue you need to add a little water to the cardboard before putting the glue on.

Then add something weighted to hold the pieces together, I used coffee mugs, of course use a clamp if you have one.

Once the fins were dry I did a final bit of cutting for the window/porthole of the rocket ship. I used a bucket to trace the circle before cutting it out.

Once the glue is dry all the structural work is done.  And you can start painting which is the fun part!

I went through our craft bin and old art supplies to see what I had for painting the box.

Ideally I didn’t want to have to buy anything extra for this as I was trying to make something with what I had.

I have lots of leftover white wall paint around so I started with one coat of white all over the box as a base.  I wasn’t worrying about the quality of the paint job at this point!

Luckily I had lots of silver craft paint left over from an other project so the rocket-side became silver. My son actually wanted a pink rocket but you have to work with what you have.

If you have leftover spray paint now would be the time to use it as it would make the job much quicker!

For the train side I planned out where the face and wheels would be before painting, this was to conserve paint as I didn’t have as much green as I would have liked.

Did I not mention this isn’t just any old train? My son loves Thomas the Tank Engine, but he’s blue and I didn’t have enough blue paint so I based my train face on Thomas’s friend Percy who is green.

For the wheels I used a round bucket to trace the circle and a flat piece of cardboard to draw the straight lines on the wheels.

Silver paper plates would have been awesome for the wheels but I didn’t have any of those either!

You don’t have to be an artist for this part just take a bit of time to plan it out first.

The face wheels and number were all drawn with a black sharpie pen.

I found a couple small acrylic green and blue paint tubes when I was already nearly done so I added the earth painting on the rocket, I looked up a picture of earth from space and free handed painting the land, it turned out good enough that my toddler could identify it.

The painting step is quick except for the time waiting for the different sides to dry so that it could be flipped over since all sides are painted for this project.

If you don’t have lots of leftover paint you could work with what you do have – wrapping paper for example could work or you could tape or glue on construction paper or whatever else you have.

In order to prolong the entertainment out of my two for one cardboard playhouse I actually showed my son only the train side to start off with.

He loved it and played in it loads thinking it was just a beautiful steam engine!

When he started to get less entertained by it I blew his mind by flipping it over to reveal it was also a rocket ship!

Mummy for the win!

Even if you don’t have exactly the same sort of box as I did I hope this tutorial will inspire you to use what you have to make something for your kids.

It really is a great feeling when they are enjoying something that you made yourself! It is one of the best value presents when you can make something yourself that sparks their imagination.

Not only do they get to make believe and have fun they also see their parent being resourceful and creative which is a great model for them in the future.

P.S. If you want to add even more play opportunities to your cardboard train you could add extra boxes on the back to form a train car, passenger car carriages and a caboose!

You could even use masking tape or black construction paper to lay down some train tracks for your little conductor to ride on.

If you like this train craft idea and you want to save it for later, don’t forget to pin it!

Repurposing Junk to make an Outdoor Side Table - Upcycle My Stuff

[…] My son then played with the box as though it was a cave afterward! He does have a thing about playing with cardboard! […]

This is such an amazing idea!! Super creative!