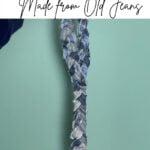 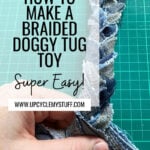 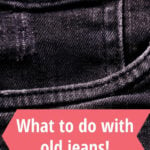 When I reuse old jeans I like to upcycle every part of them for a different project. This tutorial is all about using the thick seams from a pair of old jeans to make a braided denim dog toy.

Specifically this is a tutorial for making a doggy tug toy – the kind where you hold on to one end like a handle and the dog tugs at the other end.

Step 1: Cut up your Old Jeans

If you haven’t done so already – you can see the video tutorial and blog about how to cut up your old jeans here.

Once you’ve cut up your jeans you want to select 3 long seams of roughly (very roughly) the same length. So it could be the two outside leg seams and one inseam for example or the inside seams from 3 different pairs of jeans.

The ones I had were roughly 62″/158cm in length and I did have one that was longer than the others.

When that happens what you want to do is line them up so that the longer piece is the same amount longer on either side.

I tend to hold mine up off of the surface I am working on and fold all the seams at their middle and then line them up (see the video below if that doesn’t make sense!). Because we are going to start our braiding in the middle too.

The next step is to braid a section in the middle to form the loop or handle of our denim dog toy.

It isn’t massively important how long the ends are as long as they are roughly the same length.

I just eyeballed it. So when I was holding up the seams at their middle point I let the ends touch my table (with me seated) and then put some clips on either side where the seams reached my nose – roughly 16-17″ at either end.

Put one clip on one end holding all 3 seams and 3 smaller clips (they can even be paperclips) at the other end – one on each seam. You need the 3 clips on the second end because you are going to be braiding and you need to see where to stop.

Once you have your clips in place you need to put something heavy on top of one end (or get someone else to hold it for you).

Then you braid – just like you would braid hair – until you reach the clips on the other end. Then stop.

Step 3: Form the Loop and Finish the Braid

Once you have the middle section of your dog toy braided you want to fold it at the mid point to form the loop or handle.

Secure it again with a heavy book or another person.

Then bring the two sets of loose ends together and braid them until the ends become so uneven that you can’t braid any further.

In order to braid 6 lengths of seam like they are 3 you just need to take 2 at a time.

I tend to alternate mixing up different sets of two so I get some weaving going on and the toy has a little more strength.

When you get to the end you will likely have one or two longer seams but you will reach a point where you can’t really braid it any further.

At that point you want to take the longest seam and wrap it around the other ends and tie it tight several times.

Lastly just trim the ends to make them all a similar length to each other.

If you liked this post and you want to return to it later, don’t forget to Pin it!

I did the exact same thing for two of our dogs (both blue healers), and they chewed right through them in no time flat!