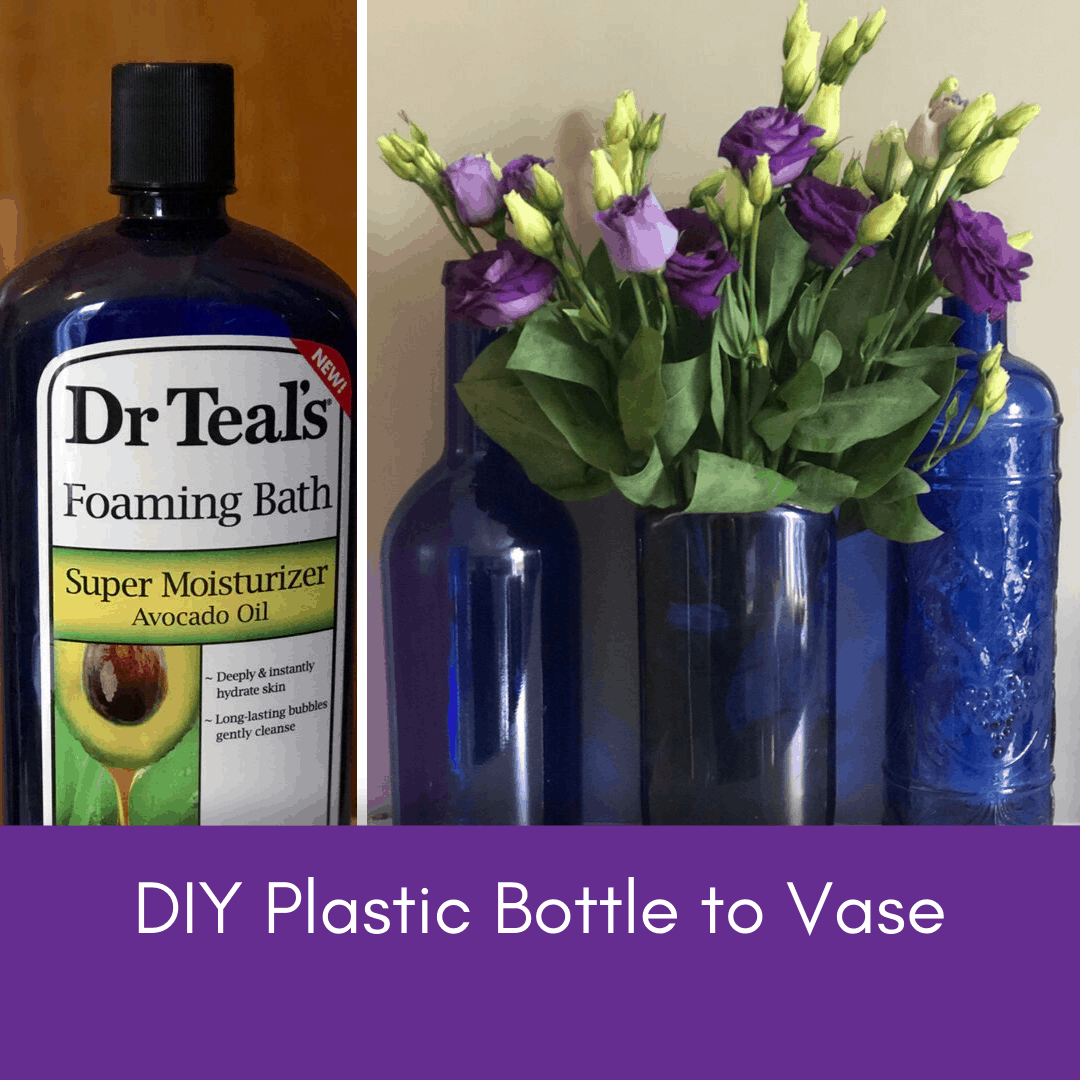 This is a super easy project to make your own DIY vase from a plastic bottle.  You’ll also find a great hack for removing label residue from plastic bottles without using harsh chemicals or rubbing alcohol.

I love a nice bubble bath and recently during a soak the blue colour of my plastic Bubble Bath bottle got me thinking about this upcycle project idea.

As well as bubble baths I also have a bit of an addiction to blue glass bottles.  I pick them up at charity shops whenever I see them.  My bubble bath bottle was exactly the same shade of blue as my glass bottle collection, so I decided that rather than recycle it, I should add it to my collection – despite it not actually being made of glass!

Step 1: Peel Off the Labels

First off, obviously you want to remove whatever labels are on the plastic bottle you have chosen.  My Dr Teal’s Bubble Bath had labels on 3 sides.  If your labels come off in one go and you have minimal sticker residue you can skip down to Step 3.  If like me you were left with bits of label and sticky residue on your bottle then Step 2 is my hack for removing this sticky label residue from a plastic bottle without harsh chemicals or having to leave your bottle to soak overnight.  I don’t know about you but I upcycle when the spirit moves me, I don’t have the forward planning be soaking things the night before!

So I have looked far and wide for methods to easily remove sticky label residue from plastic bottles and the best, non-toxic, recommendations I could find involved baby oil.  I don’t have any baby oil in the house on a regular basis, but I do have Almond Oil, so I gave it a try and it works great!  Here is what I did.

Step 3: Cut the Top off your Bottle

I first intended to draw a line around the top of my bottle where I wanted to cut it, but then I noticed that where I really wanted to cut was along the line of where the bottle curves up to the top so I didn’t really need to draw a line as the bottle naturally had a line to follow.  If your bottle is more straight up and down then you can use a measuring tape to measure the height you want your vase to be and draw a line at that level all around the bottle with a sharpie.   Use that line as your cutting guide.  Ideally draw the line a tiny bit higher than where you actually want the top to be.

I started by piercing the bottle a little bit above where I wanted the top of my vase.  The hole I made was  just large enough to get my scissors into.  I used a steak knife (because it was nearby),  but you should use a craft knife as they are safer!  Either way keep a good grip of your bottle while you make your fist hole so you don’t slip and hurt yourself.

Once you can get your scissors in just cut around the bottle to remove the lid.

Once you have cut your bottle you will be left with some rough edges at the top.  To ‘remove’ these you can use an iron.  I got this idea from a DIY tutorial we referenced in a previous blog post about upcycling ideas for rubbish.  That project was about cutting up plastic bottles and making bracelets.  In it the DIYer used an iron to soften the edges.  What the iron is really doing is slightly curivng the edge in with the heat.

I used the wool setting to do this, but essentially you just want a medium heat.  This is also easier if you have an even height all the way around your vase.  Mine is slightly raised and the front and back so I just had to angle around a bit to get the hot iron to touch all the edges enough o do the job.

That’s it, all that is left is to fill your vase with water and flowers.  This is a super simple DIY vase tutorial for using your old plastic bottles – especially the ones with a fun colour!

If you liked it, Pin it!

Looking for more great ways to upcycle things you would otherwise throw away?  Check out these posts:

How to Upcycle Takeaway Containers into Decorative Trinket Bowls

How to Upcycle Cardboard into a DIY Photo Display Board

Love Upcycling? Get all the latest tutorials!

Let us fuel your addiction!